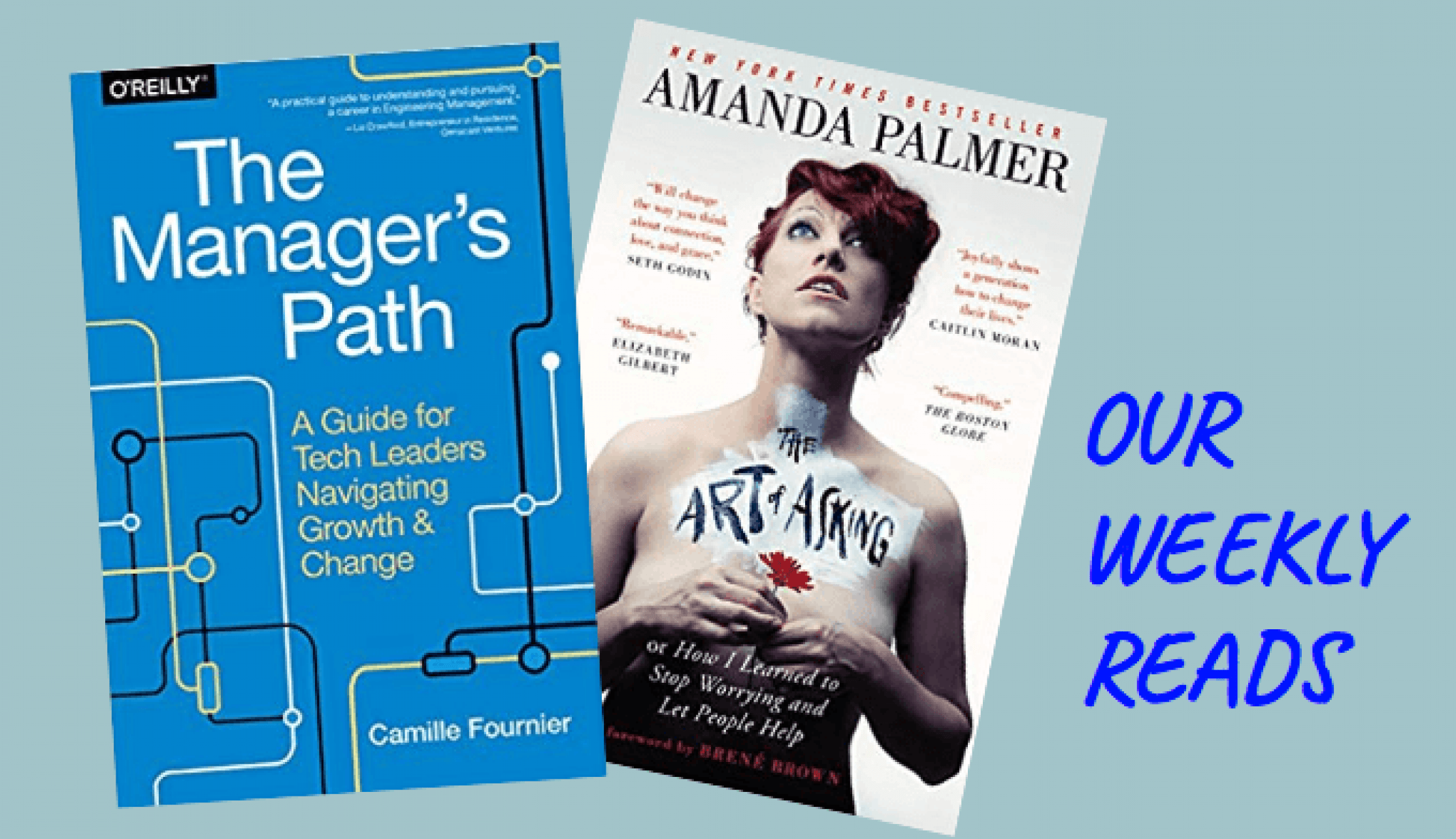 The bookworm chronicle by the CTO and the CMO

Noémie Benoit, CMO at Around Media and Daan Depaepe, CTO at Around Media, are known in our startup as avid readers - especially when it comes to books and guides about managing teams, start ups and the tech world.

Each week they share their top reads with us and fill us in on what they got out of the book, what they implemented at Around Media - but also on what they disagree.

The Managers Path : A Guide for Tech Leaders by Camille Fournier

Camille Fournier, Managing Director of Two Sigma, an investment hedge firm that uses technology as a part of their platform in their investments, published in 2017 a practical guide on how to be a great technical leader. Called The Manager’s Path: A Guide for Tech Leaders Navigating Growth and Change.

In her book Camille Fournier shares her experiences in managing people in the tech industry. She talks about making teams effective and delivering outcome for business, hiring and getting the right people in the door in the first place, and aligning yourself with the values of your company. She takes you through each stage in the journey from engineer to technical manager, from mentoring interns to working with senior staff.

1. How did this book catch your attention? I read generally a lot, but it used to be more technical. In January I got promoted to my first leadership role, CTO at Around Media, and I began reading on the subject of "leadership" straight ahead. I basically googled "5 most interesting books of leadership" and Camille Fournier's book came up. It seemed very interesting - and it held its promises!

It is very relevant for tech startups, because it is written by someone who experienced it herself. It is full of practical tips and experiences.

2. Who would you recommend this book to? Anyone in a leadership position in a software / tech company or anyone, who wants to get there. Because Fournier starts at developer level, but shows all the way up to CTO.

3. Which techniques from the book did you implement in your daily operation at Around Media? I started doing "One-on-One meetings" with my team. Basically every book on leadership recommends that, but Fournier really emphasizes it. Stating that:

“Skipping 1-1s because you’re too busy with other things is a great way to miss the warning signs of an employee who is going to quit.”

She emphasizes that One-on-One's:

I just started doing it, but I already see that it is working. In One-on-One's I can give precise feedback and get feedback. Also people speak more freely and say what is on their mind. As I lead a ten people, I do One on One's every two weeks, more frequently would be too time consuming. So far, we talk about anything they want to talk about and it works. But I just started, so I will evaluate if this is the right path or if I need to structure it better.

Another point I took from "A Manager Path" is improving the culture of the company. I think the entire company is working on it and we have long way to go until a true open culture, where people feel secure to give open and honest feedback. That is one of the most important things for me.

One technique we are implementing are "Post Mortem Meetings". Let's say the server went down. We plan a Post Mortem for this specific issue, in which we try to understand very detailed what led to the incident, create a timeline, evaluate how we reacted and what were the measurements we took? We share our analysis with the team, so that everybody can learn from it. The most important about Post Mortems are to keep them absolutely blameless.

Fournier compares being in a management position to spinning plates in a circus. I think that is a great metaphor, which encourages and helps a lot.

"The best way to describe the feeling of management from here on out is plate spinning. If you are not familiar with it, plate spinning is a fancy form of juggling where the juggler has several poles, each with a plate spinning on top of it. The juggler must attend to each plate before it slows down enough to fall off the pole. Your plates are the people and projects you are overseeing, and your job is to figure out how much attention each one needs and at what time. It is important that you approach this spinning with a student's mind. You're still learning how to spin plates, and you're going to drop some on the floor because you've neglected them for too long. Honing your instincts on when to touch which plate is the name of the game." Camille Fournier in The Managers Path : A Guide for Tech Leaders

5. If you could sum it up in one sentence - why is this book a must read?

It is full of practical advice from someone who experienced it herself. Fournier gives you concrete situations instead of theory.

To learn more watch the interview below:

The Art of Asking by Amanda Palmer

The Art of Asking is the life story and everything learned out of it by a very unusual, but highly successful woman called Amanda Palmer. Amanda Palmer is a rock star, crowdfunding pioneer, and TED speaker - best known for her role as front woman and keyboardist for internationally acclaimed punk cabaret band The Dresden Dolls.

When touring, The Dresden Dolls regularly asked for volunteers, food, couch space, and for local musicians to get up on stage. Asking for help did not only solve their immediate problems, but also created a community, where it was common to support each other.

The urge for support grew even stronger, when Amanda broke with her record label. She decided to record a single album by starting a crowd-funding campaign and collecting more than 1 million dollars. In doing so Amanda Palmer did not only change the way music was financed but pioneered crowdfunding for the artistic sector worldwide at that time.

Asking for help can be one of the hardest things to do in today’s world. But Amanda has been constantly asking for help, leaving her comfort zone and confronting herself with the fear of showing weakness by asking. In her book she shares her experiences and reflections between her inner self and the world around her.

1. It is not the first title, which crosses your mind when you think of literature, which helps you business wise. What can a tech company learn from a rock star? Amanda Palmer is not only a star, she is first of all a leader. She embarked on a self-development path marked by questioning herself, do-it-yourself experiences, loneliness and vulnerability, combined with the willingness to share her experiences. On this journey she built long-term relationships as well as a loyal audience. The most interesting part of it is that it happened slowly, organically and without intentions. Rather out of the desire to share music, support, recommendations and art.

She is - what we call today - a true influencer. THE influencer by excellence. But without the intention of influencing.

So when it comes to our company I am especially inspired by two of her virtues:

2. How did Palmer's approach towards her community influence you in regards to your marketing strategy? I really like to inverse the way marketing is done today. Instead of paying much money for brand awareness and to gain followers, I rather do it the other way around. Build the community first -and than include them in the process of creating our product or build some things together. This way you also make sure, that your product is relevant to the audience whose problem it addresses.

3. What does the "Art of Asking" really mean and how do you implement it at Around Media, when it comes to fostering a company culture where everyone feels comfortable asking for help? Asking for help means accepting that you are vulnerable and okay with it. That is the starting point. After that follow many little steps, such as:

You have to be open to critic, feedback, ideas and to question your work. If you are willing, it is the moment you truly connect with the other person. Where your ideas merge into a third, better idea. And were you build lasting relationships.

Again we lead by example, by doing it ourselves day after day. Sometimes you fail, that's okay, just try again. Educate the others to ask questions and create an atmosphere of trust and openness. As a leader you can be proactive on that: Would it help if you would tell me where you are on this project? Do you want to discuss this feedback together while taking a coffee? Did you learn new things from that experiment? Etc.

The advantage to work in young companies is the plasticity of people. People at the beginning of their career are open-minded and eager to learn. Questions arise naturally, you only need to support that! Also if we are talking about "young people" we are talking about Millennials and Generation Z'iers - it is basically in their DNA to leave their comfort zone.

What is your biggest fear and how did Amanda Palmers book help you to overcome it? Ahah - good one. My biggest fear is to discover one morning that I was totally wrong in what I did so far. When you are a startup entrepreneur this is a very common fear. You started all by yourself, you learnt a lot by yourself and you are continuously putting yourself into question: Is my product worth it? Is the way we market it okay? Do we need to pivot around or change or experiment more? You are in constant questioning mode!

Amanda is the true master of this art. She seems accidental but she actually elevated the art of asking to a professional level that we can only be inspired by. Even though we are not artists at all!

Stay tuned and follow us on LinkedIn or Facebook. From now on, once a week Noémie and Daan will share their favorite books from the world of Tech + Startup with you.

Noémie, Daan and Karolin on behalf of the entire Around Media team.